The Yuma County Chamber of Commerce held a public press conference on Friday, January 30th, 2009 at the Yuma Community Food Bank, at 10:00a.m.

Locally we must step up and establish an environment to generate jobs. We must do what we can to keep Yuma-area residents gainfully employed. It is best that our friends and neighbors have jobs that allow them to put food on their family tables rather than stand in unemployment lines. We need to put the unemployed back to work that will maintain healthy businesses and add to the economic wealth of this community.

We wanted to convince city officials that we cannot ideally stand by and watch the construction and development communities digress even further. We then presented a prepared statement that many organizations had already committed to. Yuma City officials attended and participated.

A subsequent meeting with the Chamber Executive Board and the City took place on Friday, February 13th. Additional discussion took place and we await a decision. 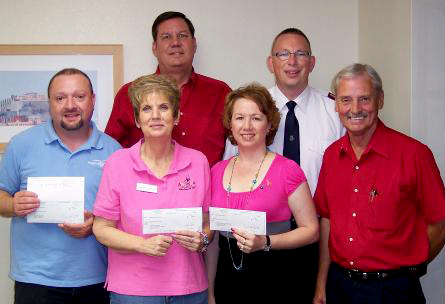 In the picture:
First row left to right is: John Williams of Hospice of Yuma, Diane Umphress of Amberly's Place, Ronna Sue Stubbs of Yuma Food Bank and John Townsend of betteryuma.org
Second row: Jack Puckett of betteryuma.org and Jonathan Harvey of The Salvation Army of Yuma.
Not Pictured: Myra Garlit of The Crossroads Mission.

Our organization, in keeping with our mission to make Yuma a more pleasant place to live, recently gave $1,000.00 checks each to various charitable organizations.

Since 2003, BetterYuma.Org has served the business community by informing the citizens of Yuma County about the risks, costs and complexities facing new and existing businesses, and in particular, those faced by developers.

The group was formed by a diverse group of business men and women intent on helping the Yuma area continue to develop "smartly" and "fairly."

"It was created by a small group of businessmen and leaders and it grew into a substantial number of members," said Harvey Campbell, BetterYuma.Org president.

"We are the voice for businesses and large landowners that are looking to develop in the future. I would say we are the voice for the average citizen that wants to promote fairness and to keep the city and county accountable." The organization works with the Yuma Southwest Contractors Association, the Yuma County Chamber of Commerce and other private and government entities to pursue its goals.

"The real mission is to create fair and equitable business and development in the city and county," Campbell said.

"Whenever there is a real issue, we really try to inform people so that they have accurate information to make a decision, regardless of what it is. Albeit, they are usually major issues such as the roadway plan, the railway plan, impact fees, and water/sewer capacity fees. We've tried diligently to have an impact on those issues."

When the group was founded, Yuma's economy was much more robust.

"There was, of course, a real spike in the population of Yuma and the building, primarily residential as well as commercial," Campbell said. "Early and mid-2000s were an extreme boom time. I don't know if we will ever see anything like that again.

"Of course, we did go through the recession. We had a height of almost 70 members, and we are down now hovering at just over 34."

The vast majority of members lost were subcontractors who could no longer afford to pay the annual dues, he noted.

Even with the loss of members, the organization did not lose its focus and continues to promote a business landscape in the Yuma area conducive to all, Harvey said.

"Primarily our mission has never changed or waffled at all in that we still promote fair and equitable business practices and growth in the community that is fair and reasonable. We have a real good core of members who participate monthly with their time, effort and influence, as well as other members who contribute financially to support the organization."

Over the years, BetterYuma.Org has built an excellent working relationship with the city of Yuma, Campbell said.

"We want to make sure we check and balance the city in their function as a governmental agency. We want to make sure they are in compliance with state statutes and are being fair and equitable on the playing field across the city. We have had a lot of one-to-one affiliation with the Yuma council and the city staff, and I think we work very well with the city administrator, Greg Wilkinson."

One notable collaborative effort between the organization and the city involved the development of impact fees the city charges land developers when new business sectors or residential neighborhoods are constructed. Impact fees help offset the city's cost for needed infrastructure such as sewer, water, gas, electrical lines, roads, police and fire protection, and other public services.

"Working through the new law and fees with BetterYuma.Org helped us reach a consensus and bring a new fee structure to the council," Wilkinson said.

"This could have been a very contentious issue but instead was approved unanimously by council with little discussion in the final vote. I believe it was supported nearly unanimously by the business community.

"Both the city and BetterYuma.Org want to do what is best for the community. Working jointly with other organizations isn't always possible, but when you can, it usually works out well in the end."

Wilkinson "couldn't imagine being able to do my job without good working relationship with the business community," he said.

The great working relationship the city enjoys with both BetterYuma.Org and the Yuma Chamber of Commerce "has also helped the city as they give us the ability to reach out to the businesses to lay out city plans, explain and clear up any misinformation that may be out in the community," Wilkinson said.

"We don't always agree on everything with what needs to be done and how, but the vast majority we do. It is just a matter of how we get there, and hopefully we can do it together with each other's support."

Such a relationship is essential to the Yuma area as a whole, Wilkinson added.

"The working relationship with BetterYuma.Org and other organizations similar are key to making and keeping our community the great community that it is. Yuma is known throughout the state and country as a community that works together. The city and all these type organizations, at the core belief level, want to do what is best for the community."

In the future, BetterYuma.Org will "continue to deal with impact fees and development credits with the city, and have the city come into compliance with the state statutes," Campbell said, adding the group is currently "working with the city on building code revisions that they are recommending changing."

The organization is also concentrating on major issues facing the economy stemming from the lingering effects of the Great Recession and is seeking new members who would like to "join us in supporting our community so that we can educate the general public on major decisions that affect our lives," Campbell said.

"Some people think of BetterYuma.Org as simply an organization that supports developers. It's not. We have a litany of members: bankers, title companies, landowners, developers, insurance agents, etc. They are just real good citizens that really are concerned about good, smart planning for the future of our community."